Jump to Recipe
by Lynn // August 11, 2016
We may earn money or products from the companies mentioned in this post.

Light and lemony, with a slight tang from the sourdough, this recipe is great. Adding jarred lemon curd to the batter makes these delicious waffles extra special. In my family we would much rather have waffles for breakfast than pancakes. It just seems to me that there are so many different ways you can make waffles. Like this recipe for Lemon Poppy Seed Sourdough Waffles. Dust off your waffle makers everyone, it’s time to make waffles.

After trying out the ? waffle maker and the fact that my grand-kids have fallen in love with homemade waffles, good-bye frozen waffles, I decided to buy a Cuisinart Belgium Waffle Maker. I like the bigger or thicker waffles that a Belgium waffle maker produces. The thicker waffles also freeze really well, which I also like. They make fantastic Chocolate Chip Waffle Ice Cream Sandwiches which are not only my grandson’s favorite but also mine. 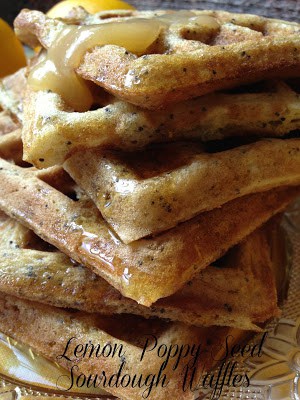 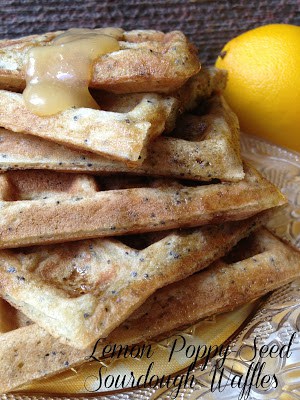 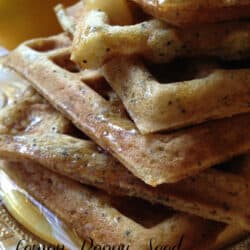 Yield: 4 servings
Delicious waffles with the tang from the sourdough and citrus from the lemon.
No ratings yet
Leave a Review »
Print Recipe Pin Recipe

If you like lemon you’ll love these light and lemony bars with a touch of raspberry. Lemon Raspberry Bars. For this recipe we used Mc Cormick poppy seeds.