Jump to Recipe
by Lynn // November 27, 2017
We may earn money or products from the companies mentioned in this post.

A super simple fruit salad that is remarkably delicious. 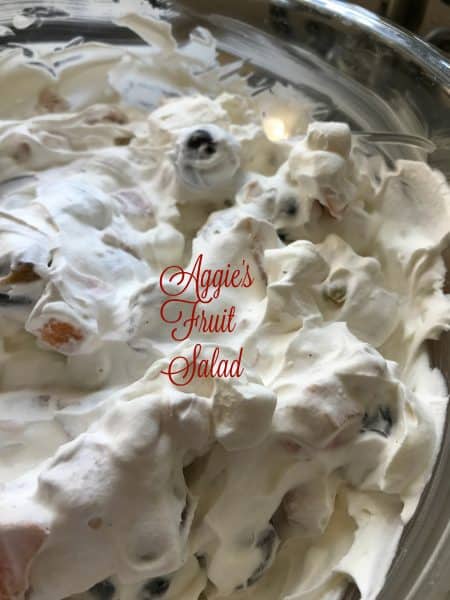 When I was growing up, I remember eating this fruit salad for Thanksgiving and Christmas. I have stated before that my mom Aggie was a horrible cook. I mean terrible. Aggie would totally agree. She couldn’t cook to save her a$$ but Aggie could sew up a storm and always had a nice flower garden. Some of her specialties were; Tuna Casserole, Spaghetti and Meat Sauce, Lasagna, Pork Roast with Sauerkraut, Pork Chops in Cream of Mushroom Soup and on occasion, maybe Shake ‘n Bake Chicken and that’s about it. I know that sounds like a great list of dishes but let me add here, that that was all she made. The menu pretty much stayed the same. We did have mashed potatoes and always had bread with every meal but never, ever did we have fresh vegetables, only canned.

Lunches included; grilled cheese sandwiches, fried egg sandwiches, tuna sandwiches and Chef Boy-ar-dee Pizza in the box. Aggie made a concoction called brown sugar toast….if your around my age, you might remember this concoction yourself. White bread, usually Wonder bread, with one side of the bread buttered, then a sprinkling of brown sugar over the bread. The bread went under the broiler until the brown sugar and butter was melted together into a sugary, syrupy, buttery mess. 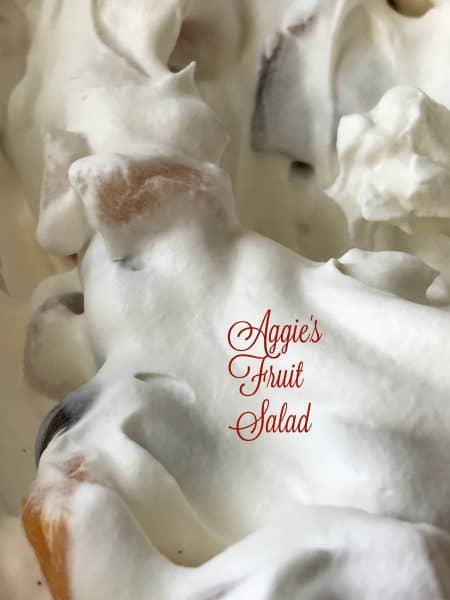 Dinner for All Seasons

Another thing Aggie liked to do was she liked to serve whatever was in season. That may sound harmless enough maybe even frugal and healthy really, but as a kid, this wasn’t cool. Let me give you an example; let’s say apples where in season, then apples would be our dinner…just a baked apple, that’s it….if corn was in season, we’d eat corn-on-the-cob for dinner and we’d each get our own stick of butter and shaker of salt. If squash was in season, then we’d have baked acorn squash, watermelon season,  watermelon was on the menu. So on and so forth. Let me reassure you, none of my friends ever wanted to eat dinner at my house! Never-ever.

The real secret to making this fruit salad is really quite simple. Make sure that the fruit is well drained. If the fruit isn’t well-drained, the salad will become watery after you stir in the whipped cream and the fruit salad won’t last as long. Let’s face it, no one likes a watery, mushy, fruit salad…not even Aggie! 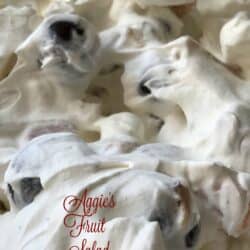 Course: Salad
Author: Lynn / Turnips 2 Tangerines
Did you make this recipe?Tag @lynnturnips on Instagram with the hashtag #turnips2tangerines