Jump to Recipe
by Lynn // November 5, 2018
We may earn money or products from the companies mentioned in this post.

Both my son and daughter-in-law are teachers, so whenever I go on one of my fudge making marathons, I can always count on them to bring extra fudge to school. Even though my son-in-law Fred is my go-to fudge guy, this past weekend I went with Kim to our annual Stampin’ Up, Holiday Stamp Camp and brought with me this fudge for her to bring to school. Kim said it was a “Fan Favorite,” not making it to first period. 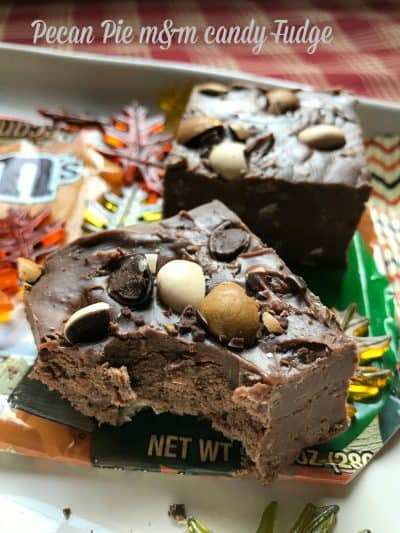 Pecan Pie candy fudge is made with the ‘new’ pecan pie flavored m & m’s. My biggest ‘candy’ weakness is for m & m’s. To me eating a bag of m & m’s isn’t the same as let’s say eating a king size candy bar. Eating a handful of m & m’s seems to me anyway, to contain fewer calories than a big ol’ candy bar. All of the ‘flavors’ of m & m’s that I’ve tried have been super good. My favorites being the Mint and Holiday White Peppermint flavors. I love the combination of chocolate with the flavor of cool mint. Sorry Kim. 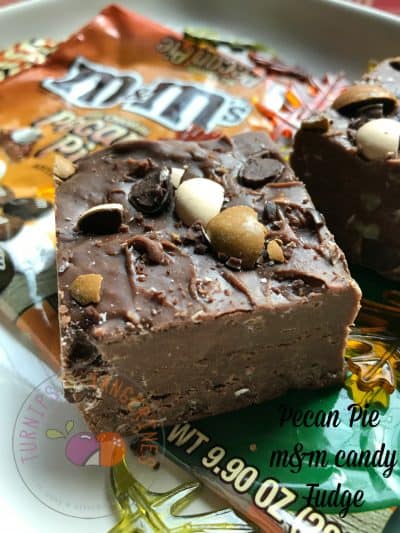 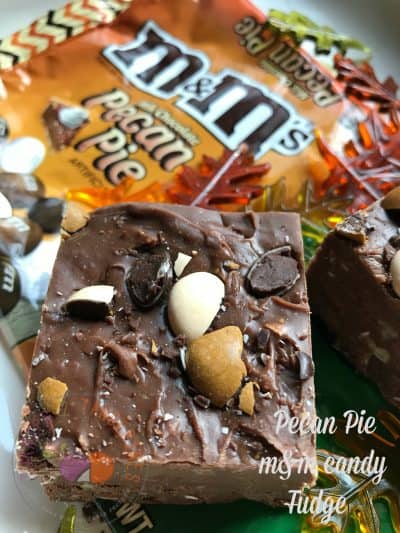 Pecan Pie m & m candy Fudge is made with the same recipe that I use when making all the fudge here on Turnips 2 Tangerines. We use the same basic fudge recipe but change it slightly to allow for different taste flavor sensations. We make this recipe taste different just by changing the chocolate chips used, candy and nut additions used and sometimes with only the slightest change, just by changing the extract or flavoring used. 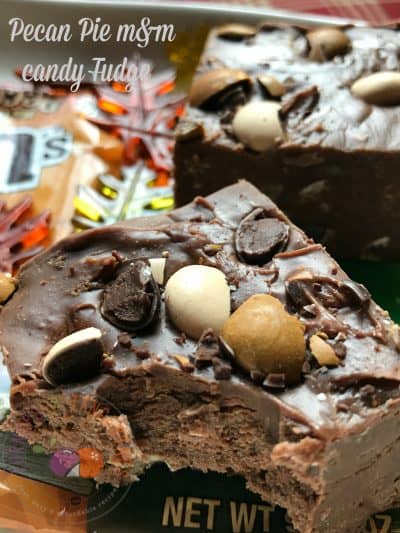 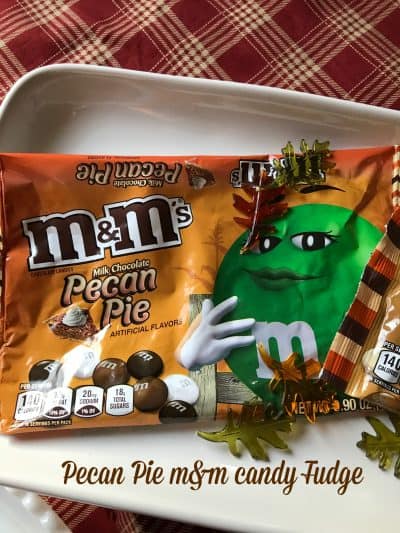 In 1941, M & M’s® Brand Chocolate Candies were introduced as military rations during World War II. In 1948, packaging changed from tube form to the characteristic brown pouch we know today. In 1950, The first “M” is imprinted on the candies in black, giving the chocolate candies a unique
trademark. By 1954, M & M’s® Brand Peanut Chocolate Candies launched.  The tagline “Melts in Your Mouth, Not in Your Hands” was born.

The world famous M & M’s® characters made their television debut in the late 1950’s. In 1958, MARS moved to a new plant in Hackettstown, New Jersey, mainly due to the success of M & M’s® plain chocolate candies. In 1960, three new colors, red, green and yellow were added to the color mix. Yellow and Red were introduced as the first M & M’s® Brand spoke candies. In 1976, orange joined the color mix.

M & M’s® became a NASCAR® sponsor and M & M’s® spokes candies began appearing on the cars in 1990. In 1991 peanut butter candies were introduced and Blue became the new spokes candy after 10 million people voted to add Blue to the color mix. M & M’s® Minis debuted in a small tube, a nod to the original M & M’s® packaging. Green made a successful television debut in 1997.

M & M’s WORLD® Store opened its doors in Las Vegas and M & M’s® Candies was named the official candy of the new millennium. Crispy M & M’s® Candies was introduced. In 2002, voters in more than 200 countries worldwide chose from purple, pink or aqua to join the rest of the colors for a limited promotion. The world voted for purple!

Joining the Permanent Line Up 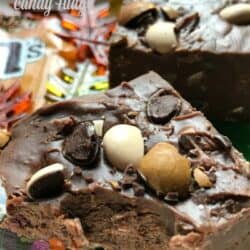 Looking for more Sweet Treats?? Surely these will make you smile:) Valentine Popcorn Balls or Bars and we can’t forget about this classic and family favorite, Chocolate Pretzel Candy.