Home » Around the World Recipes » Irish Tea Brack or Bread

Jump to Recipe
by Lynn // March 15, 2021
We may earn money or products from the companies mentioned in this post.

Barm Brack or Tea Brack is a cross between cake and bread, traditionally eaten at Halloween. While bracks bought in bakeries will use yeast as a rising agent, the classic brack recipes use baking soda instead, much like soda bread. Irish Tea Brack or Bread is very moist and delicious, with a taste all its own. Irish tea brack can be topped with a glaze of honey and Irish whiskey after baking. This recipe calls for soaking the dried fruit overnight in a mixture of very strong, hot, loose-leaf black tea, dark brown sugar or molasses and honey. 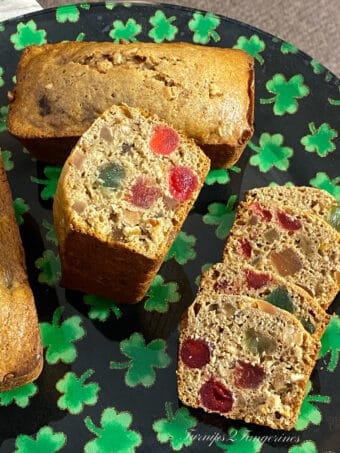 This special speckled bread was known as báirín breac in Ireland and bara brith in Wales. Brought to prominence in the 1800s when baking ingredients became commonplace in Irish and Welsh homes. The fruit brack assumed a new identity everywhere it was known. Each country having its own version or something similar too, speckled bread. No written or printed recipes survived in Ireland or Wales until the modern cookbook first appeared in the late 1800s. That was when recipes passed down through families began to appear in print.

In the 1800s when rustic recipes began to appear, it indicated a much older tradition. The bread was made with natural yeast, yeast most likely from the beer-making process, the barm. In Wales that line divided to create two versions. A yeasted fruit bread and an unyeasted fruit cake. In Ireland they already had two distinct types. The báirín breac made with yeast and dried fruit and the tea brack made with dried fruit soaked in tea, and made with baking powder.

Fruit breads are commonplace in Celtic, Etruscan, Gothic, Nordic and Roman ingenuity. They use dried fruit such as currants, raisins and sultanas. Warm spices such as cardamon, clove, ginger, cinnamon, fennel, and nutmeg add bursts of flavor. Lemon peel, orange peel along with their juices add a citrus tang. Many breads contain nuts like almonds, hazelnuts and walnuts. Natural sweeteners such as honey and molasses were used along with fats such as lard. Before yeasted bread became a daily event, fruit breads and fruit breads made with sourdough starters were eaten at ceremonial events.

Only one type of yeasted fruit bread has survived with an authentic history. This is the fruit bread known as stollen in Austria, Germany and Switzerland. A yeasted loaf with a high butter and fruit content. Stollen is associated with the German city of Dresden. It’s found in the months up to the end of year festivities throughout Germany and Switzerland. This time is   known as stollen-fest. Free-formed by hand and shaped into loaves, stollen comes in several sizes. Dresdner Stollen is also known as Dresdner Christstollen. Stollen is recognized as a traditional product and in June 2008 the European Union granted protected geographical indicator status to Dresden’s iconic fruit bread.

The word “brack”comes from the old Irish word, ‘breac’ meaning speckled. This refers to the small pieces of dried fruit speckled throughout the bread. The bracks made with yeast are called “barmbracks.” Those that use baking powder and fruit soaked in tea are called “tea bracks.” The word “barm”(often pronounced barn) is from the old English word “beorma” meaning yeasty. 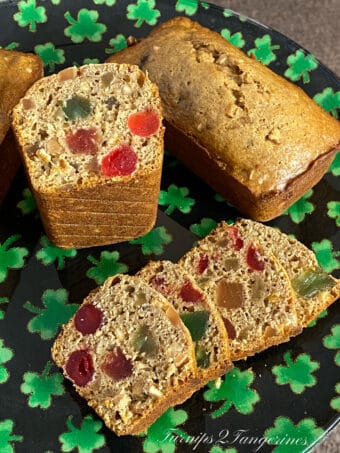 Traditionally, small trinkets are mixed into the brack before it is baked. Each has a message or prediction for the person who gets it in their slice. The items include a ring, which predicts a wedding within the year. Any or all of the following trinkets are sometimes included. Wrap each trinket separately in a greased pieces of waxed paper before inserting into the bread.

Historically, Irish Halloween barmbrack is based on the Celtic festival of “Samhain” (Sawh-en) which is derived from Old Irish and means roughly “Summer’s End.” With the plantation of Ulster in the early 1600s, the Scottish colonists brought with them the festival of All Hallows’ Evening (All Hallows Even’) celebrated on the same night and the two traditions merged. This was the night that the souls of the dead were thought to walk the earth and many people believed it a setting for supernatural encounters. Therefore, holy-water was often sprinkled on farm animals, bedsheets and the like to keep them away. 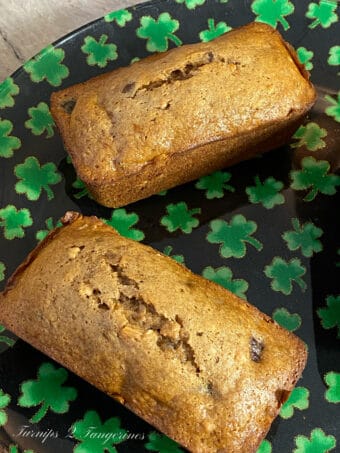 Irish Tea Brack is a not-too-sweet quick bread that made with dried fruits that have been soaked in strong black tea. You can use any mix of dried fruit as I did, using a fruitcake blend from  Paradise Fruit Co Dark raisins, craisins or diced dried apricots would work as well. The whiskey honey glaze is optional but when used its brushed on the loaf while it’s still hot from the oven. For an alcohol-free glaze, use tea in place of the whiskey.

One of my all thyme favorite singers hails from the Emerald Isle. Van Morrison, with his voice either as silky smooth as an aged Irish Whiskey or as gruff and gravely as any cobblestone lane in Ireland. If I live long enough or some money falls from the sky and lands in my lap, I’d love to visit beautiful Ireland someday and see Van Morrison in concert. That my friends, would be a dream come true. I can’t listen to the song, “Someone Like You” without getting all misty eyed. Just one of his many songs over the years that bring back a gush of memories. That might very well have something to do with my age but that’s fine with me☘️

Even though I myself am not Irish, my children and therefore my grandchildren are. I’ve always stressed how important it is to know ones heritage and to celebrate it. Whether it be through food, history, dance, music and traditions in general. Here on Turnips 2 Tangerines we celebrate St. Patty’s Day with the wearing o’ green and eating traditional Irish food. Erin go Braugh! 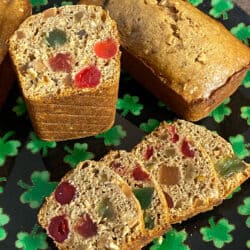 Yield: 1 Loaf
Prep Time: 12 hrs 10 mins
Cook Time: 1 hr
Total Time: 13 hrs 10 mins
A delicious Irish bread traditionally made at Halloween but is delicious anytime of the year. Similar to the American holiday fruitcake but not as dense.
No ratings yet
Leave a Review »
Print Recipe Pin Recipe