Jump to Recipe
by Lynn // June 8, 2021
We may earn money or products from the companies mentioned in this post.

Corn-on-the cob is a much loved and anticipated summer time treat. In Wisconsin, particularly during the month of August, roasted corn-on-the-cob rules! August should be dubbed “Roasted Corn-on-the-Cob month” Corn Roasts can be found literally everywhere in late July and throughout August. From bar/taverns to church picnics and all kinds of festivals in between, roasted corn-on-the-cob rules as #1. Elote Corn Dip and Wisconsin Corn Roasts have the same thing in common; CORN. 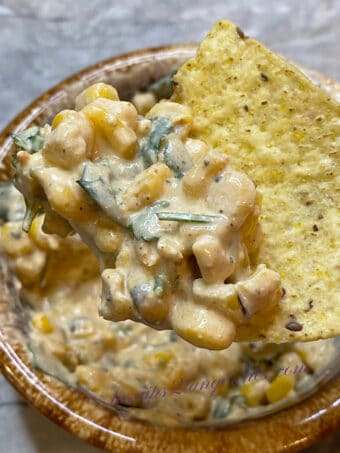 The familiar aroma of roasting corn weighs heavily in the air as you’re walking up to the corn stand. People are standing in line waiting patiently for an ear of roasted corn. While in line they’re chatting, laughing and enjoying an ice cold beer. It’s summertime in Wisconsin and life is good:) Ears of corn are handed to you with the charred husks pulled down and a piece of paper toweling wrapped around the husks. This will be your  makeshift “handle” Steam is raising from the tender, juicy, semi-charred kernels, however, before the ears are passed on to you, they get a quick dunk into a large coffee can filled with warm melted butter. How good does that sound! Please pass the ♪ large shaker of salt ♫ 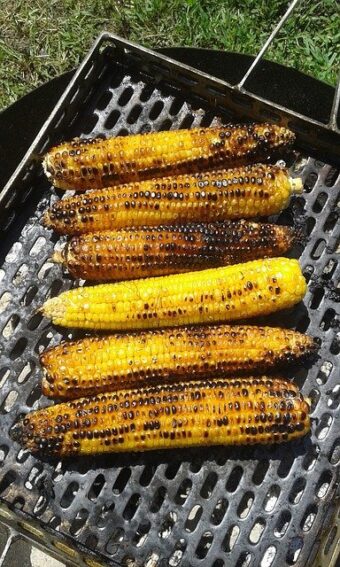 Many years ago, I went to a picnic style, outdoor wedding which was held in August.  The couple went all out with a corn roast as part of their picnic wedding dinner. The meal also consisted of grilled chicken along with all the picnic favorites. I have to admit, it was one of the best weddings I’ve ever been invited too. Around this same time, my in-laws Mike and Lynn, hosted a German Spanferkel. I’ll never forget how delicious, juicy and succulent the pork tasted.

However, I did have to get over the initial shock of seeing a whole pig splatted out on a grill, with an apple stuck in it’s mouth. That’s when I first learned how important the grill is when roasting corn and a whole pig. Since we are talking about corn today, we’ll stay on that topic and talk about a Spanferkel another time. Too much rambling going on here:) 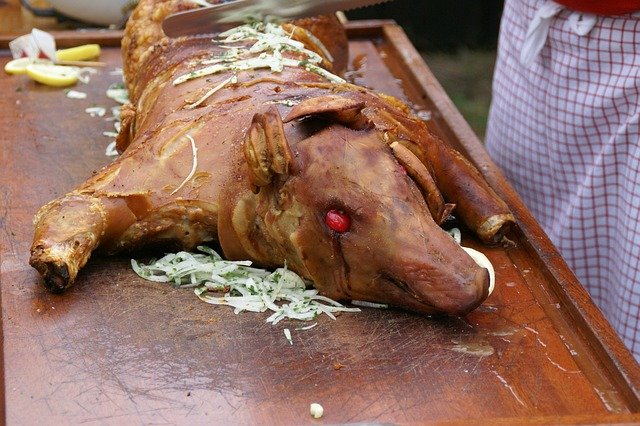 Obviously, the grill needs to be large enough to accommodate large amounts of corn-on-the-cob. It also needs to be big enough to hold large bags of charcoal. During the long hours of roasting corn at a festival or just at an old fashioned corn roast, charcoal needs to be continually added to keep the fires burning. Many of the best grills are homemade contraptions, often passed down in families.

Many homemade grills are large metal burning barrels, sawed in half, with some kind of metal ‘legs’ welded onto the bottom. Two or three barrels are placed end to end and can reach up to 6 ft. long. The open barrels are filled with charcoal, doused in lighter fluid and lite. Large grates are placed on top and Voila,’ you have yourself a corn roaster!

Corn has deep roots, especially in the Midwest where corn is part of the landscape. Rows upon rows of corn, as far as the eye can see. This landscape creates the perfect backdrop for many a road trip. An old prediction uttered by many a farmer is; “Corn should be knee high by the 4th of July” to have good, successful crop.

A saying that turns out to be true more than not. When I was growing up, back in the 60’s, during the months of July and August, we often had boiled corn-on-the-cob for dinner. And that’s all we had for dinner, along with the ever present stack of bread. 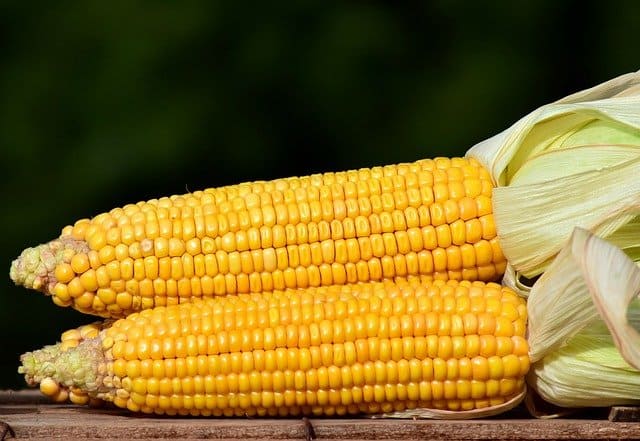 My job would be to help out my mom by shucking the corn. I’d sit on the front porch steps and shuck at least two dozen ears of corn. Once shucked, the corn was brought into the house. My mom Aggie, would fill the sink with water and in the water I’d plop the corn.

My job was done, so back outside I went to listen for my mom to call us in for supper. Waiting for us on the dinning room table would be a steaming platter of corn. On my plate sat a stick of butter, for rolling my hot ear of corn in and next to my glass of milk was a small bowl filled with salt. Super Yum!

Quite possibly my favorite preparation of corn is elotes. Since I’ve never been a huge fan of corn-on-the-cob, simply because I don’t like getting it caught in my teeth. Let’s face it, eating corn off of a cob is seriously a messy way to eat corn. Not highly recommended to eat on a first date. (unless of course you don’t ever want to see him/her again) Elotes are a popular late-night snack in many Latin American countries. However, here in the US, it has quickly become a favorite snack in the form of a sensational and addictive dip. 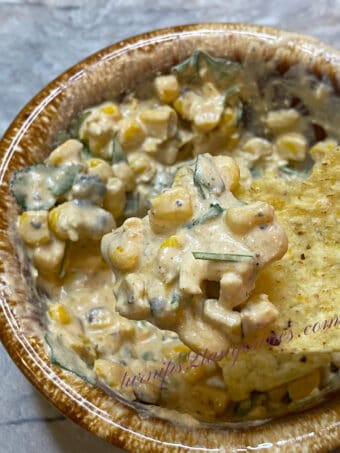 All of the same simple ingredients used to make Elotes, are used to make this lip-smacking dip. Roasted corn, mayonnaise, sour cream, chihuahua or another Mexican cheese, chili powder, cilantro, lime and salt. Elote translates from Spanish into  corn coband and in the United States it is known as Mexican-style street corn. Elotes is corn that has been charred over an open grill. The grilled corn is coated with mayo, sour cream, chili powder, plenty of lime juice, and a sprinkle of Mexican style cheese. This incredible street food is as popular in Latin Americans as the hot dog stand is popular in many major US cities. 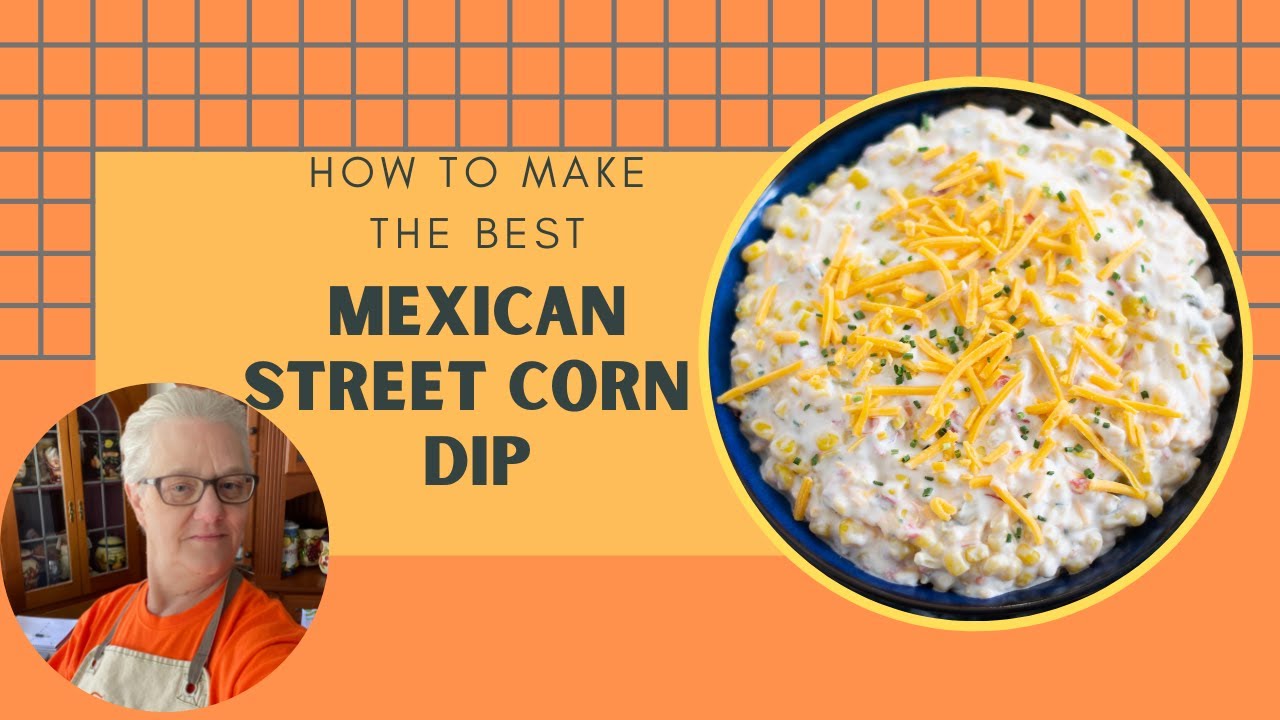 Looking for more Corn recipes? Give these a try… 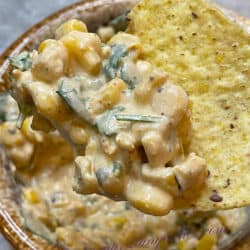