Jump to Recipe
by Lynn // April 14, 2013
We may earn money or products from the companies mentioned in this post.

Five ingredients is all that is needed to make easy peasy monkey bread. Sugar, cinnamon, brown sugar, melted butter and the ‘easy’ part, 2 cans (16 oz each) Pillsbury Grands! Homestyle refrigerated buttermilk biscuits. I’m not even sure where or when I acquired this recipe but I’ve been making it for as long as I can remember. This recipe is super fast and easy, that’s the ‘peasy’ part. 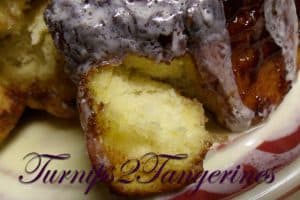 Monkey bread or bubble bread can be made sweet or savory, with the emphasis on sweet. The original recipes were always sweet versions vs savory. Both are tremendously delicious and relatively easy to make. For the sweet version, pieces of a yeast-sweet dough are rolled into balls. The balls are dipped in melted butter and rolled into a cinnamon/sugar mixture. The balls are then ‘staggered’ in a greased bundt and baked.

Savory versions of bubble bread or monkey bread have become more and more popular over the years. The savory versions are often stuffed with cubes of cheese or pepperoni-style meats. Pieces of yeast dough are rolled into balls and then dipped into a mixture of melted garlic butter. The balls are then rolled into a herb/savory spice blend of some kind. The balls are ‘staggered’ in a greased bundt or tube pan and then baked.

Whether sweet or savory, whether you call it bubble bread or monkey bread and whether you make it in a tube pan, bundt pan or a 13 x 9 baking dish, eating the bread is done in the same way. After baking, the pan is inverted onto a plate. This allows for all the gooey goodness to slowly drip down the sides and over the bread. Thus making the bread even more irresistible. Sections of the bread are then ‘pulled’ off and enjoyed! 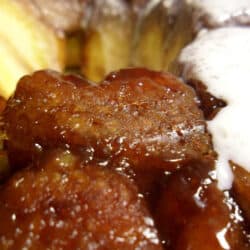 Course: Bread, Breakfast
Author: Lynn / Turnips 2 Tangerines
Keyword: biscuits, Bread, bread dough, frozen bread dough, glaze
Did you make this recipe?Tag @lynnturnips on Instagram with the hashtag #turnips2tangerines
If you’re in need of a super easy and delicious treat recipe that everyone will love… give these a try. Peanut Butter Crispy Treats 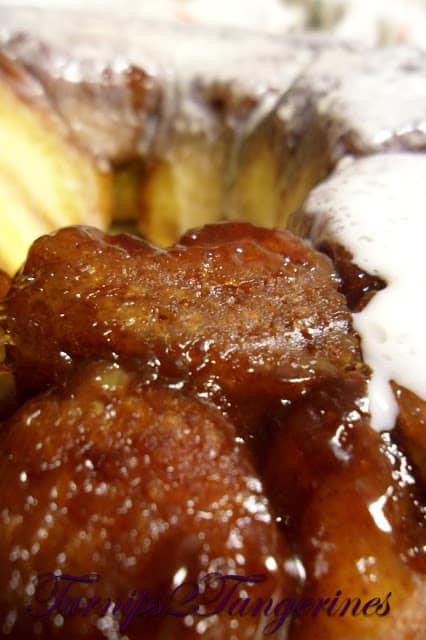