Jump to Recipe
by Lynn // March 25, 2020
We may earn money or products from the companies mentioned in this post.

This recipe for Crunchy Coleslaw Hot Dogs was originally supposed to coincide with opening day at Miller Park (or whatever it’s called now). As we all know, games have been postponed until further notice but that doesn’t mean we still can’t celebrate with a hot dog! We had tickets for the April 1st game but due to the virus, we won’t be going. Hopefully though, we‘ll be able to attend a game or two or three in the up coming months. 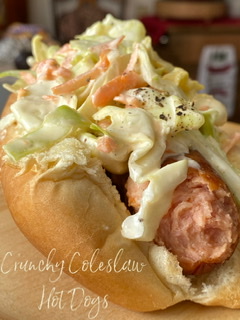 Crunchy coleslaw hot dogs are made with Cher-Make Jumbo Stadium Hot Dogs. We don’t indulge in hot dogs very often but when we do, we prefer a good meaty hot dog. The better to pile high with toppings:) There are times when a skinny hot dog will do but times like this, call for a jumbo hot dog. Feel free to use the kind of dogs your family likes. Cher-Make is a Wisconsin sausage company that has been in business for over 90 years. 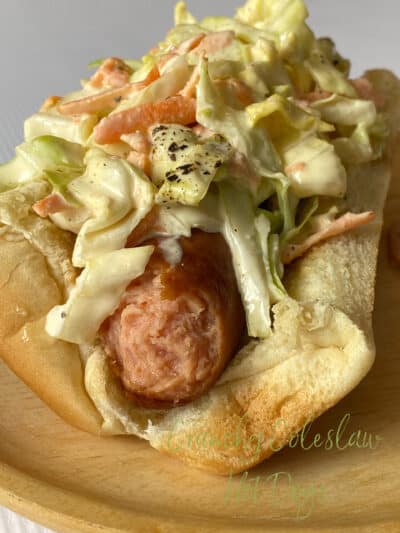 Was founded by Emil and Regina Chermak in 1928. Cher-Make Sausage Company produces hot dogs, bratwurst, summer sausage, ring bologna, chicken sausage and smoked sausage. Cher-Make Sausage Company is a locally-owned company that has deep roots in Manitowoc WI. That is where three generations of family have produced authentic Wisconsin sausages and sausage products. Manitowoc is located on the shores of Lake Michigan. 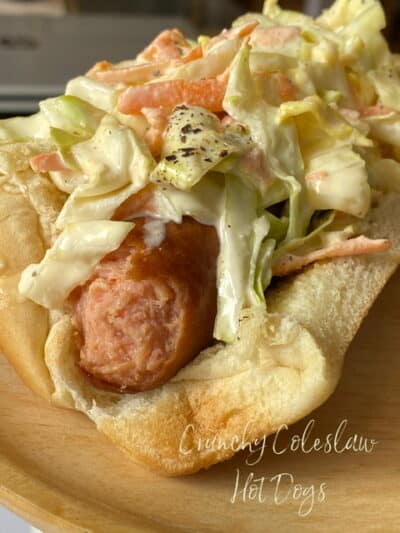 In 1928, Emil and Regina Chermak opened a small butcher shop on the Northside of Manitowoc. Emil had been employed in a butcher shop previously and with the skill and knowledge he had gained, decided he was ready to run his own shop. The demand for their natural casing wieners, ring bologna and summer sausage grew. Their son Art, would deliver their small-batch, handmade sausages to neighboring towns and stores.

Due to the company’s high standards and commitment to using only quality fresh meats, signature spice blends and hardwood smoke, Cher-Make grew rapidly. In 1938, Cher-Make expanded into a manufacturing plant located in downtown Manitowoc. The popularity of Cher-Make products continued to grow and with the passing years, Emil and Regina’s son Art, would soon be ready to take over the family business. 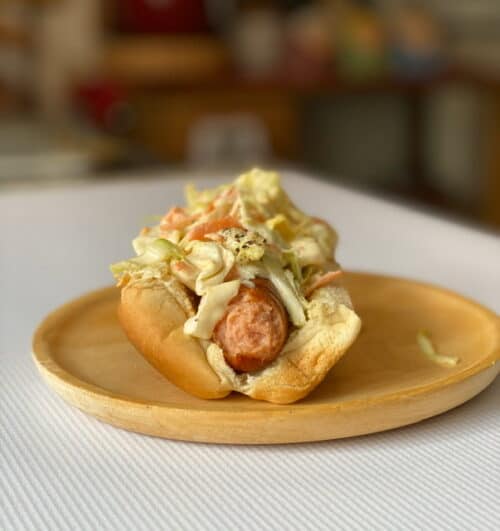 In the mid-forties, Art Chermak returned home from serving in WWII. He decided he would do what he loved. He continued in the family tradition of making high quality, authentic Wisconsin sausages. The company moved to a larger manufacturing facility in Manitowoc during this time and still remains in the same location today. Products are still made, packaged, and shipped from their Manitowoc facility. 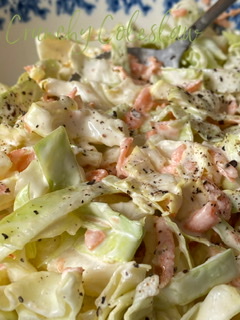 Now on to the Sauce! You can’t mention a ball game at Miller Park without mentioning Secret Stadium Sauce. SSS (Secret Stadium Sauce) is a condiment popular at Milwaukee Brewers baseball games. You can find secret stadium sauce at every vendor throughout the food court at Miller Park. More specifically, I think it’s the third spigot of the condiment trio, to the right of the ketchup and mustard. Just saying;)

It’s served on hot dogs, brats and sausages. Several tailgating, parking lot grill masters keep a simmering saucepan filled with secret sauce and dip everything from grilled chicken to hamburgers into the sauce before serving.  SSS can also be used as a marinade and in this recipe for Coney Island Sauce, Wisconsin Style. It’s a fantastic sauce to top off hot dogs. SSS is sold in 18 oz bottles in grocery stores throughout Wisconsin, at the Brewers Stadium and on Amazon.

The sauce was created in the early 1970’s by a vendor at County Stadium, Rick Abramson. During a game Rick was running out of ketchup and mustard and needed a condiment. Rick took barbecue sauce, a little ketchup, mustard, smoked syrup along with other secret ingredients and came up with secret stadium sauce. Rick simply told his customers; “We don’t have ketchup and mustard, but we do have secret stadium sauce.”

The sauce gained even more popularity in the 1980’s when baseball broadcaster Bob Costas expressed his love for the sauce on his bratwurst at the Brewers game. Bob mentioned how he and fellow broadcaster, Tony Kubek, traded broadcasting duties during the games so they could eat brats with the sauce during the broadcasts. I wonder if Bob would like a Cher-Make Jumbo Stadium Hot Dog piled high with Crunchy Coleslaw and a drizzle of Stadium Sauce! 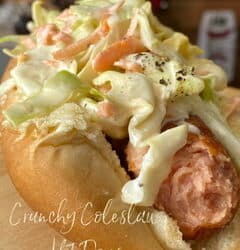 Note: Cher-Make sausages can also be found at the concession stands of the Wisconsin Timber Rattlers, the University of Wisconsin Badgers,
and the Fond du Lac Dock Spiders.