Jump to Recipe
by Lynn // December 24, 2016
We may earn money or products from the companies mentioned in this post.

When I was younger, Aggie tried several times to make scalloped potatoes and ham. Much to our dismay, (my dad, brother and sisters) Aggie’s scalloped potatoes and ham was little to be desired. The potatoes weren’t sliced thinly, which meant some of the potatoes were tender, other potatoes were hard. The sauce or milk mixture was always curdled looking, the cheddar cheese she always used got glumpy (this word is a cross between clumpy and globby) and it just wasn’t very good.

When I decided to make scalloped potatoes and ham I wanted to make it very differently than Aggie’s version. I made scallop potatoes and ham with two kinds of potatoes; russet and sweet potatoes. I went with half and half which added richness and shredded Gouda cheese that added creaminess to the dish. The addition of sweet potatoes really took this dish over the top. It added so much more than I expected.

Up Next: Strawberry Rhubarb Pie Filling 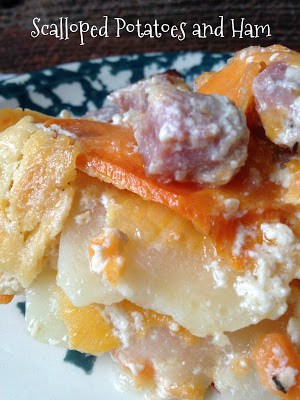 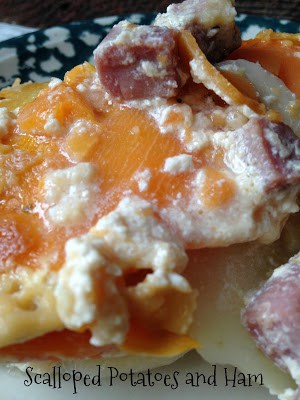 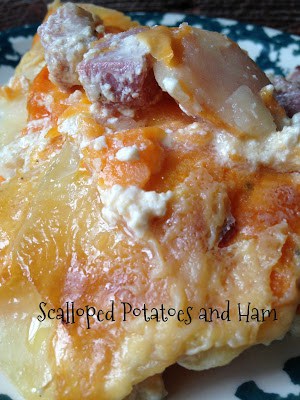 Looking for a few appetizer recipes to bring with to a Holiday gathering? We have two you’ll want to make: Cheese Stuffed Cucumbers and Turkey Pastrami Reuben Sliders. 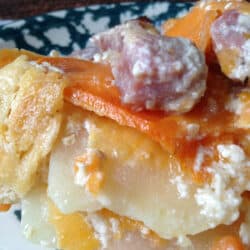 Yield: 6 servings
A delicious way to use up any left-over holiday ham
No ratings yet
Leave a Review »
Print Recipe Pin Recipe

For this recipe we used one of our favorite Dutch Gouda cheese made right here in America’s Dairyland. We’ve featured this sensational Gouda many times here on Turnips 2 Tangerines. Marieke Gouda