Jump to Recipe
by Lynn // March 17, 2017
We may earn money or products from the companies mentioned in this post.

This delicious recipe for Irish Beef Stew comes to you via Chef John at Food Wishes for Allrecipes. I made four changes to this recipe. First off, instead of serving this delicious stew over chive mashed potatoes as Chef John suggested, we opted for adding potatoes to the stew instead. Why? While at the grocery store I found these cute, small yellow potatoes. I love adding these smaller versions of their larger counterparts to stews.

Second, we also couldn’t find fresh thyme, (that looked fresh anyway) so I went with so-so fresh looking tarragon. Third, we went with one full bottle of Irish stout dark beer and we used a brand called O’Shea’s Irish Stout Beer instead of Guinness. Fourth, we used the full 6 oz can of tomato paste. Since I didn’t use Guinness beer, I’m calling this stew Irish Beef Stew, instead of Guinness Beef Stew.

I hope Chef John doesn’t mind the changes I made because this beef stew recipe is wonderfully delicious. One bite of Irish Beef Stew and you’ll be doing the Irish Jig. 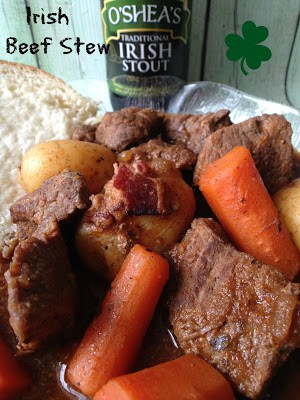 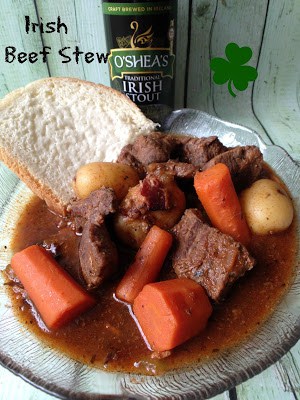 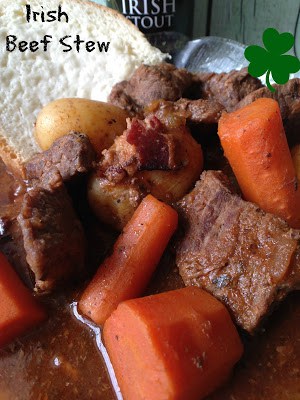 If you are looking for a minty dessert to serve after this delicious meal of Irish Beef Stew. After a meal of Irish Beef stew and thick slices of Irish soda bread, a minty, cool and creamy dessert will taste super good. Here are a few of our favorite ‘minty’ desserts. Shamrock Grasshopper Mint Pie,Mini Minty Cheesecake Brownie Cups,  and Frozen Grasshopper Pie.

This is just a short list of foods that are traditionally eaten on St. Patrick’s Day. Corned Beef and Cabbage is a the top of the list and one that most people are familiar with. Guinness Beef Stew and Irish Soda Bread are high on the list also. Shepard’s Pie, Cabbage and Colcannon are favorites. For dessert, anything made with Bailey’s Irish Cream seems to be the norm. And of course, we can’t forget about green beer!!! 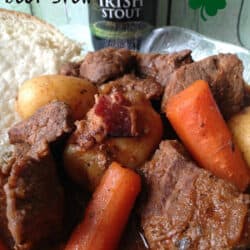